November 26, 2017
The stage lit up in a way I found overwhelming.  The crowd cheered and I listened to the music and was moved but didn’t know why.  Kids sang along, angrily, ecstatically, and I stood in their midst, tears streaming down my middle-aged face.  I found myself once again in the sacred role of witness and testifier.

Four years prior, the first concert not-of-my-choosing that I chose to attend with my daughter was some metal band. I don’t remember who but I remember the night vividly.  It was a classic-to-the-point-of-cliché mother-daughter battle:  she was 14 and NEEDED to see this band, would simply die if she did not.  Her Catholic-school friends were supremely uninterested in seeing this band, so her reasonable, modest proposal was that she, at 14, attend a gritty concert in a gritty part of San Francisco, solo.  I was not 14, and I would simply die if she went alone (I might actually have used the words “over my dead body”).  Impasse.

We were in the midst of therapy that is a luxurious necessity for the modern family with a strong-willed and determined-to-be-different teenager.  We had epic battles on the way to the therapist’s office and on the way home.  We never had any breakthroughs or tender moments of grace or forgiveness or revelations in the therapist’s office; our actual sessions consisted mostly of strained silence.  In our final session together, the therapist gently suggested to my daughter that sitting mutely and aggressively on the couch could just as easily be done at home and would be much more comfortable for all of us.  My daughter agreed, so I started going alone.  That’s when the therapist gave me the best advice I’d ever gotten:  say yes more.  Look for opportunities to say yes while this child of yours looks for opportunities to force you to say no.

So I reconsidered dying on this hill of the metal concert and said yes.  Yes,  you may go.  Yes, I will take you, and yes, I am coming along.  Yes, I will not sit with you (You won’t be sitting?  Oh, ok.), but I will go in with you and I will come out with you, and we will experience it together.  So I said yes, and because she really wanted to see this metal band, she said yes too.

I took earplugs and my Kindle.  I got a balcony seat and dressed like a mom:  I think I wore a pink button-down.  I did not want anyone thinking I was trying to fit in so age-inappropriately or—God forbid—that I was trying to be a Cool Mom.  (Little did I realize that I would be rendered invisible.)  So we went, my girl with her thick black eyeliner and black clothes and black attitude and me with my mom clothes and mom attitude.  We said goodbye at the stairs to the balcony, and she submitted to a kiss on the top of her ponytailed head.  I bought a plastic cup of white wine and settled in.

Attending a concert like this, especially as an observer, is a strange thing.  The crowd is a beast, moving, dividing, undulating, alive.  I didn’t pay much attention to the music.  I watched the crowd, originally trying to keep watch over my small blonde girl, but then just to watch the crowd.  It was … unexpected.  My Kindle never left my bag, nor did my earplugs.

The cheap chardonnay might have had something to do with what happened, but I don’t think so.  I found myself standing, tears streaming down my face, moved by what I was observing and hearing.  I felt lucky and blessed.  The crowd, far below me and in another world, pulsed with rage and hope and joy and youth, responding to the words and to the rhythm.   The music, instead of the noise I had expected, was hauntingly melodic, the musicians connected to their audience in a way I'd never seen.  It was one of the most moving things I’d ever witnessed or experienced.  The fact that my little girl was down there, crowd-surfing and body-slamming and head-banging, was somehow more extraordinary than it was frightening or worrisome.  She was fully present and alive in that magical moment, part of that collective pain and ecstasy, and I was glad.  I was so proud of her, and I was honored and humbled to have been allowed in as a witness.  When we met at the base of the stairs after the show, she was tired and sweaty and a little bit bruised and happy and ready to be taken home.  And I was changed.

Going to concerts together became our thing.  She never resisted my presence.  We sat together at arena shows, but usually we were at small venues, where she was in the pit and I was in the balcony, or at outdoor festivals, where she'd be at the stage barrier while I wandered.  We saw bands I already liked and learned to like more:  Ed Sheeran, The Lumineers,  Twenty-One Pilots, Foo Fighters, Alice in Chains, Silversun Pickups … and bands I’d never have listened to on my own but learned to love:  Bring Me the Horizon, Of Mice and Men, Brand New, Frightened Rabbit, Thrice, La Dispute … It’s what we did, and somehow, along the way, our battles decreased in intensity and frequency.  I don’t know if it was correlation or causation, but I do know that things got better.  Along the way, I learned about new genres and sub -genres and got to observe a younger generation up close— and my girl learned that her mom not only loves her but also really likes her and enjoys her company.

Now that girl is 18 and a first-year college student, living across the country.  On the first night of a recent Parents Weekend, we went to a concert together.  She was in the pit; I was in the balcony with my plastic cup of white wine and the familiar gratitude of a privileged observer.  The lights pulsed along with the crowd, the lyrics eluded me and yet moved me, the innovative visual effects did the same … it was all just beyond my grasp, but not so far that I could not appreciate it or keep trying to reach for it.  I was in that elusive liminal space … that sacred thin place between the living and the dead, that sacred thin place between youth and … not-youth.  “As you are now so once was I.  As I am so shall you be.”*

My concert-not-of-my-choosing days are coming to a close.  This most recent one was probably one of the last.  My concert buddy no longer lives at home, and my insistence on a watchful presence going along with her no longer holds.  My ready response, when my cloak of middle-aged invisibility occasionally slipped and someone looked askance at me, was a nod to the pit and a proudly apologetic “My daughter’s down there.”  She was my ticket in. I am grateful.  As I enjoy future concerts with and by and for my peers, I will think of and miss those holy liminal spaces and those beautiful, angry, joy-filled revelers of my daughter's youth.  I will keep listening to my daughter's and my music ... and I will always be grateful that I said yes.


*Common early American gravestone inscription, in case you were curious:
Remember me as you pass by,
As you are now, so once was I,
As I am now, so you must be,
Prepare for death and follow me.

Popular posts from this blog 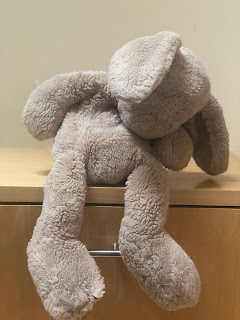 This is my Love Bunny.  Yes, that is its name.  Don't judge. My guy gave it to me 28 years ago, when he first told me he loved me.   He wanted me to remember that moment, that sweet moment, that first hint that this rather stoic academic I was falling in love with was actually super sentimental.   Those early years  … Oh gosh, we were clueless.   We were in love, sure, but pretty much always trying to impress each other, which is maybe just committed infatuation?   Once actual Real Life started happening, everything changed; it was raw and messy and no one was impressed with anyone ever and it was mostly about survival:   3 babies; 5 more in heaven; moves; financial stress and disagreement; family far away;  me: lonely and alone with the kids while he constantly traveled for work; him: lonely and missing us and missing out while he was on the road; the sudden deaths of our fathers; medical scares; scary diagnoses; learning difference diagnoses; job stress
Read more